Following the 9/11 attacks, the country vowed to “never forget” the nearly 3,000 lives that were lost that day, yet somehow another group of heroes was largely forgotten. But now, a monument honoring the first responders, rescue workers and local residents who have died or are suffering from toxins released from the collapsed towers, has risen from its shadows.

The 9/11 Memorial Glade is a dedicated space within the National September 11 Memorial plaza that memorializes the sacrifices made by the rescue and recovery workers, the relief community, survivors and members of the broader Lower Manhattan community. The World Trade Center Health Program has identified 2,355 deaths attributed to 9/11-related health problems as of March 2019.

“Like the heroes we lost on 9/11, their selfless acts provided light that helped guide us through our darkest hours and they allowed our city to rise again,” said former Mayor Michael R. Bloomberg, at the memorial’s dedication ceremony in May, according to The New York Times.

“For some, the end of the recovery was the beginning of an even more difficult journey of sickness and disease,” said Bloomberg, who serves as chairman of the 9/11 Memorial and Museum.

The memorial consists of six granite boulders rising from the ground that line a path through a glade of trees leading toward the iconic Survivor Tree. The severely damaged tree was discovered at Ground Zero and relocated to serve as a symbol of strength and resiliency. The pathway was also the site of the ramp that workers used to haul debris away during the cleanup, and became an ad hoc memorial where visitors left flowers and paid respects.

The Glade is designed to convey the struggle and loss caused by these individuals' exposure to toxins at Ground Zero, while recognizing the uplifting capacity of the human spirit by highlighting the courage, selflessness, and perseverance of those who worked there.

It took a large team to accomplish this project, some of them seen here in the Vermont craftsmen center, including plant foreman Scott Lafreniere, designer Michael Arad, Rob Boulanger of Rock of Ages, team members from KC Fabrications and Edward Sidor, senior director of design at The National September 11 Memorial.

The 18-ton slabs of LAURENTIAN GREEN ™ granite, quarried by Polycor in Canada, were composed to look like layers of rough hewn rock erupting from the earth. Steel salvaged from the original World Trade Center was also incorporated into the stone structures. The layered boulders were cut and fabricated at the Rock of Ages craftsmen center in Graniteville, VT where numerous artisans chiseled the stone by hand to create a weathered look.

Rock of Ages worked closely with the 9/11 Commission and the memorial’s designer, Michael Arad, who visited the craftsmen center multiple times to work with carvers, according to Rock of Ages Senior Vice President Rob Boulanger. “This collaboration allowed us to create exactly what they envisioned,” he said. 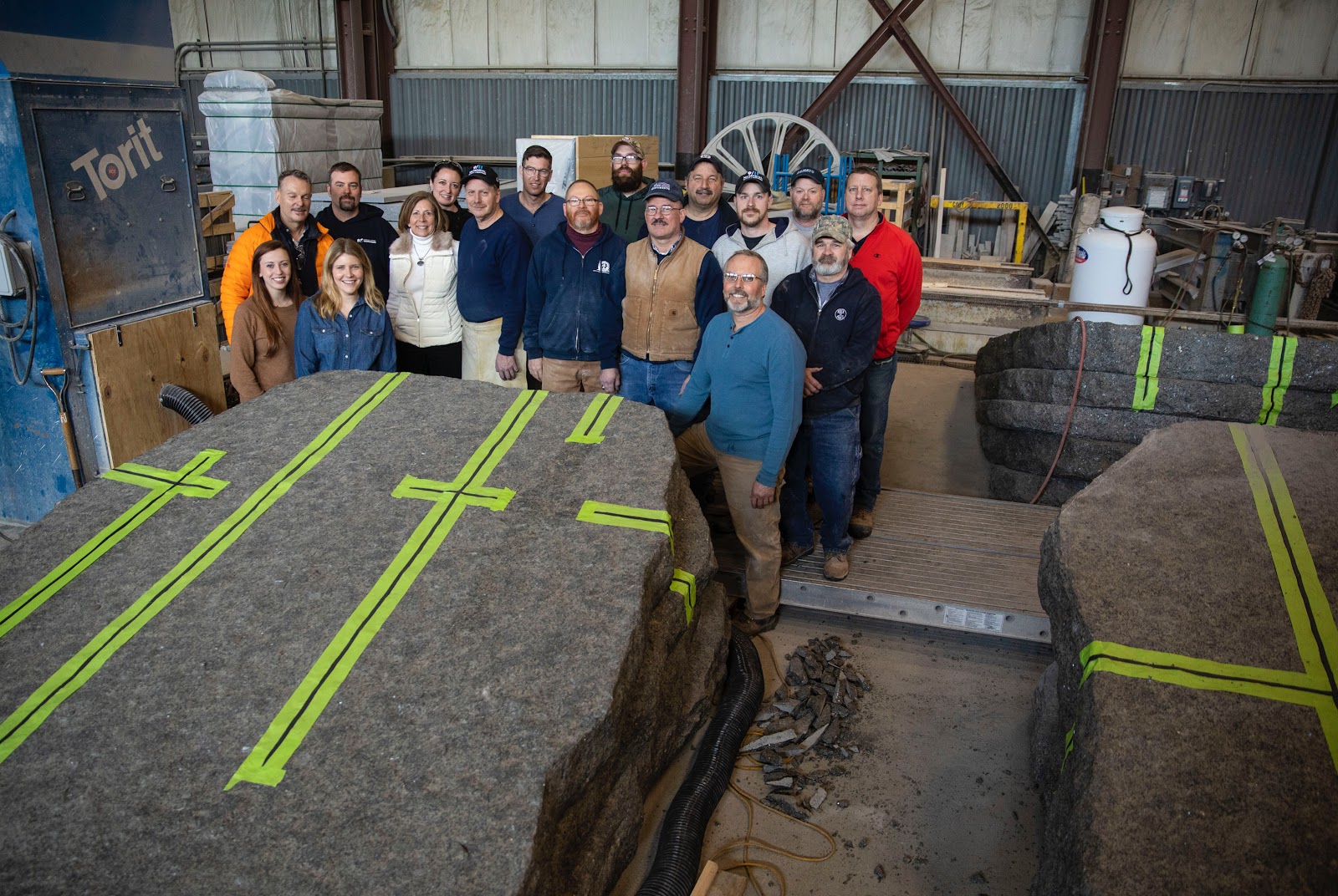 Inside the craftsmen center: Many hearts, hands and minds came together to design and fabricate The Glade boulders.

Rock of Ages Project Manager Dave Fournier explains how his team transformed dimensional blocks into what appear to be natural rock formations that have been split by trauma and mended with molten steel.

“We started with raw blocks from the quarry and slabbed them into different thicknesses between 7” and 13.5” inches, randomly grouped among the six units and shifted left and right to create randomness,” he said. “Each of the slabs was sawn on two faces, then the edges were rock pitched with a hammer and chisel and then flamed to give the worn look that Michael was trying to achieve.”

The most labor intensive stage of the project was the top surface of the boulders, Fournier said. “The top slabs were cut by hand. Michael [Arad] didn’t want to use a typical saw that would create straight lined patterns. Doing this by hand created that randomness that he wanted to achieve.”

It was tedious work that took months of hands-on labor and collaboration between designers and craftsmen. And it was a joy, Fournier said. Both because of the passion of the designers themselves and the personal relevance of the memorial. Unlike most civic memorials that Rock of Ages creates for far-off communities or historic events from another lifetime, this one was personal and recent.

“[The artisans] didn’t have to go to a history book to learn about 9/11 because for most of the people here, it occurred during their lifetime,” Fournier said. “It gave it a little more meaning for them, especially those who are first responders. They drew satisfaction from that connection.” 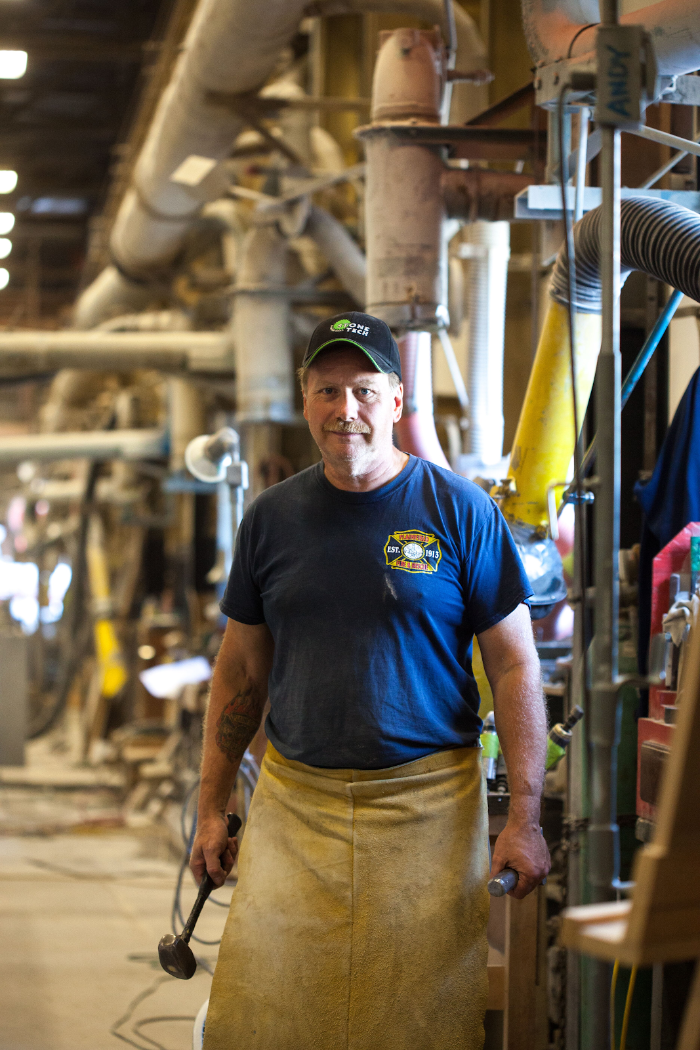 Andy Herbert, one of the Rock of Ages artisans who crafted the boulder sculptures.

"It's a great honor for me to do this for them," he said. Herbert has more than 40 years carving experience under his belt. He’s also been a volunteer firefighter for decades and now works as the second assistant chief of the Plainfield Fire Department in Vermont. A badge remembering Sept. 11 hangs in his work space at the craftsmen center and he has a “9-11” tattoo on his arm to commemorate the tragedy.

Once the six boulders were completed they were each strapped onto a flatbed truck for the six-hour drive from Vermont to Lower Manhattan for installation. The convoy was accompanied by a traveling team of eight Vermont Division of Fire Safety personnel and along the route, local first responders cheered the procession.

Never too late to remember

The Memorial Glade came in response to the initial 9/11 Memorial, which paid tribute to the lives lost in the attack and was dedicated on Sept. 11, 2011. Many first responders and locals who were suffering from illnesses, as well as the families whose loved ones had died after the attack, felt the existing memorial overlooked this important group of victims. Arad, who designed the reflecting pools in the footprints of the original Twin Towers, created an addition to that plaza to amend the oversight.

“I [was] trying to find a way to convey strength and resilience but also the difficulty of that experience, the toll that it took. But even bruised and battered, [the boulders] remain standing,” Arad told Fast Company.

The design was vetted by many of the stakeholders, including first responders and their advocates, family members and Lower Manhattan residents.

More than 22,000 credible claims to the September 11th Victims Compensation Fund have been filed as of April and most have come from rescue, recovery and cleanup workers, according to data compiled by the fund.

"To know that there's acknowledgement of those men and women that have passed and that are still sick and dying is a tremendous win for us," former New York City firefighter Michael O'Connell, who retired after being diagnosed with an immune disorder, told the AP.

"Our motto is 'Never forget,'" O'Connell said. "And a place like that shows that we will never forget."