When you ask artist Richard Deutsch about his work, he will first tell you the history of the place where it's located. That information fuels the inspiration for his public art sculptures. "When I do a piece, I'm asked to respond to the place, the history and what makes it special," he says. "I'm hired to create spaces that make a location unique and echo its purpose."

Many of his pieces are massive in scale and often include smaller pieces in the surrounding area to tell a story or create an experience. They're made of various materials, ranging from bronze to stainless steel to stone.

Of them all, he says he loves the personality of stone the most. "It's a material that has antiquity written into it. It's already more expressive than other material," he says. This desire to work with stone led Deutsch to Rock of Ages.

"I was doing a piece in Italy at a granite company there, and they put me where the slabs come out of the polisher," he says. "I saw Bethel White® and I was like, 'Wow, where is this from?' They told me Vermont and gave me a cutoff. I kept it in mind for future projects. When I started the Legacy project, it was perfect. So I called Rock of Ages."

This began an ongoing partnership between Deutsch and Rock of Ages. When Deutsch plans to work with stone for a project, he will work with the Rock of Ages team to find the right piece of stone and then he is set up in a workshop to create the piece. "I've worked there on different levels. I've ground things, shaped and sculpted and worked with them digitally," he says.

“Our team always enjoys working with Richard and learning about the history and thought process that goes into his work,” says Rob Boulanger, Senior Vice President of Rock of Ages Manufacturing. We’ve really enjoyed the challenge of helping Richard create his unique designs using the capabilities of our equipment and, most importantly, the skillset of our team. It has made for a successful partnership.” We’re honored that he chose to work with Rock of Ages on these deeply meaningful projects.”​​

Here are a few of the pieces Deutsch created in partnership with Rock of Ages: 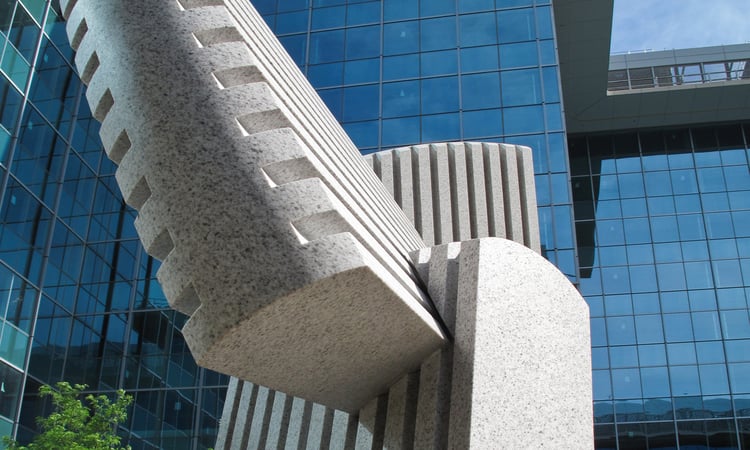 Legacy was the first project Deutsch did with Rock of Ages after seeing their BETHEL WHITE® granite in Italy. "I asked to come out, show them the plans and look at the material. I met the whole Rock of Ages crew. They were agreeable to me working with them. Everything seemed to line up. It was a very complex stone piece, and we were really pleased with how it came out."

The project is a tribute to architect Edward Durell Stone, an influential name in mid-century design. The original structure featured marble slabs that vertically went up the 10-story building and created a look of white corduroy. The building was later redesigned into a contemporary glass structure, and the marble façade was dismantled. Legacy, with its interlocking pieces of Bethel White® granite, was created to evoke the memory of Edward Durell Stone's celebrated work.

What better way to represent an educational center than a book? The Wings of Thought project is symbolic of this university founded by Rev. Dr. Francis Alison in 1743. He came to America from Ireland and wanted to help develop minds as the world developed. What started as a free school became a major university, but they never had any art on campus. Deutsch created Wings of Thought from a single, massive piece of BLUE GRAYTM granite  from the Rock of Ages quarry. "It took about four months for the equipment to be in the right location to quarry this size stone," says Deutsch. "Rock of Ages did a wonderful job of cutting out the book and helping me get all the parts and engraving done.

The piece sits at the front entrance of the campus. Deutsch added that he delights in seeing students enjoy the work. "I get more people contacting me about that sculpture than almost any other piece I've done. I think because it symbolizes the school, people fall in love with it and identify with it. People lie on it in the sun, and meet friends there. I love that they live on it. It's not a piece they're intimidated by; they own it." 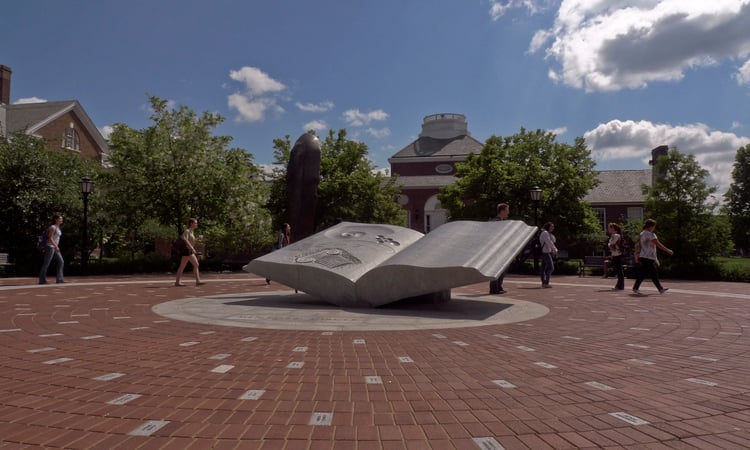 How do you make artwork that's accessible to the blind? For this polytrauma and blindness center that is part of a veteran's healthcare facility, Deutsch wanted to give the patients there, and visitors, an experience. He created a metal sculpture and a stone sculpture that consists of a 12-ton piece of Rock of Age's Blue GrayTM granite. "We worked on it with a diamond wire to give it a wavy flag look," says Deutsch. "The larger metal sculpture is in relief coming off the stone, and the patients can feel the sculpture they can't see."

The area also includes several stone sculptures that are tactile and meant to be touched as well as sculptural stone benches that make up the 5,000 square-foot artistic environment at the health campus's front entrance. "It offers them an experience they can have on their level while they are in rehabilitation," says Deutsch, who added that the most moving part of creating this piece of art was getting a message to the soldiers from Colin Powell, which was carved into the stone. "Those words mean a lot to them," says Deutsch. 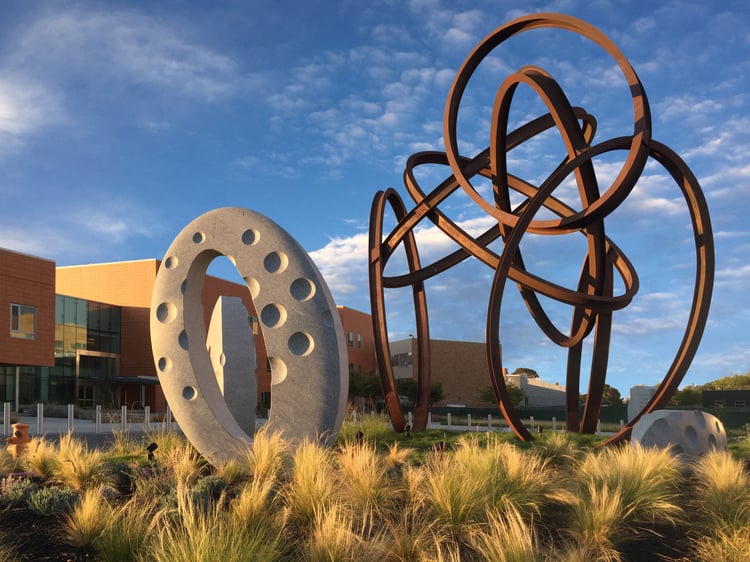 Benjamin Franklin is the namesake of this building. The sculpture represents 12 puzzle pieces to honor the 12 members of Franklin's Junto Club, aka The Leather Apron Club, a collection of tradesmen and artisans who met to discuss morals, politics or natural philosophy. The sculpture and the 25-foot walls next to it with text about Benjamin Franklin are carved from Bethel White® granite. "It was a piece of the most beautiful Bethel White® granite," says Deutsch of the sculpture. "It's so pure, and it was huge, 15 feet high, 8 feet wide and 3 feet deep. I spent a lot of time at Rock of Ages working with the guys. I think it's Bethel White® at its best."

Deutsch says the partnership with Rock of Ages on these pieces has been good. "They're very open to having an artist like me there. They make everything available to me—the saws and shapers—to get the project done. It's been a wonderful collaboration. All of my work that has come from their shop has been first-rate."

At Rock of Ages, we know that stone is forever, which is why it's used for memorials and monuments to withstand the test of time. The concept strikes a cord for Deutsch as well. "It's not lost on me that this is a material that formed over millions of years, and I'm manipulating it. I can't work on stone and not think about that. As I get older and think about the legacy of my work, I know it will live on, and the maintenance of stone is much easier than other materials." 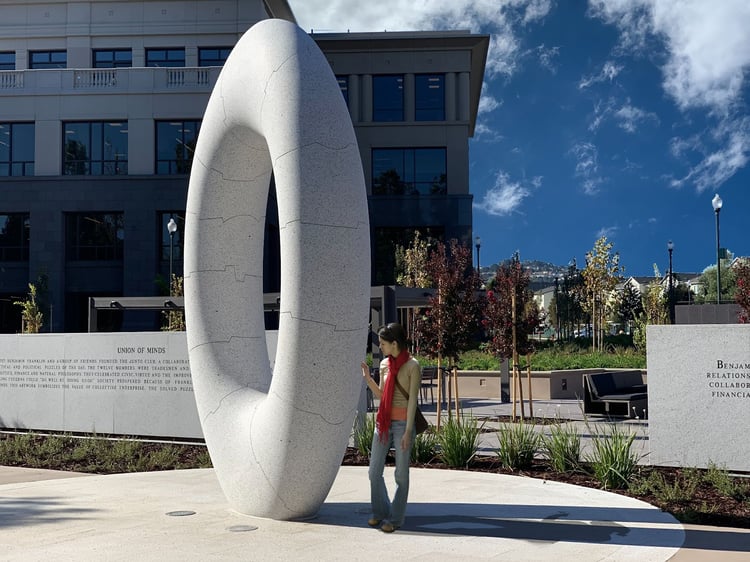 Deutsch says he feels very fortunate to do this work. "The wonderful thing about my career is that it always seems to expand my ability and my intellect. I'm always challenged by the next project. I just hope I can keep developing artistic projects and thinking about history and people and how to make this world a better place."

Read more about Richard Deutsch and his art on his website: richarddeutsch.com