The Joseph Smith Memorial Lights Up the Holidays 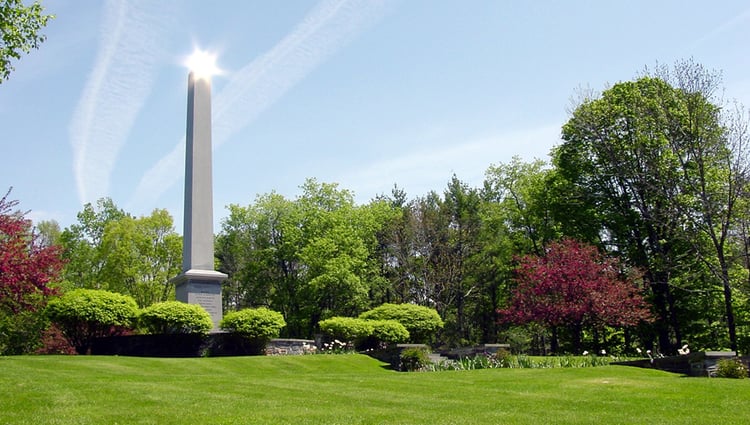 Amid 350 acres of beautifully landscaped grounds in the White River Valley of Vermont, a 51-foot-tall BLUE GRAY® granite obelisk stands tall, commemorating the birth of Joseph Smith, prophet and founder of The Church of Jesus Christ of Latter-day Saints. During the holidays, colorful lights surround the monument and the public is welcome to come enjoy the display from November 26, 2021 to January 1, 2022.

The solid stone obelisk was completed in 1905. In the last 100+ years, it has required no maintenance other than the graphite lettering, thanks to the superior quality of Blue Gray granite, quarried from the Rock of Ages E.L. Smith Quarry. But how did such a large stone get from Barre to Royalton, some 33 miles, back in the early 1900s? The story is almost as impressive as the monument itself. 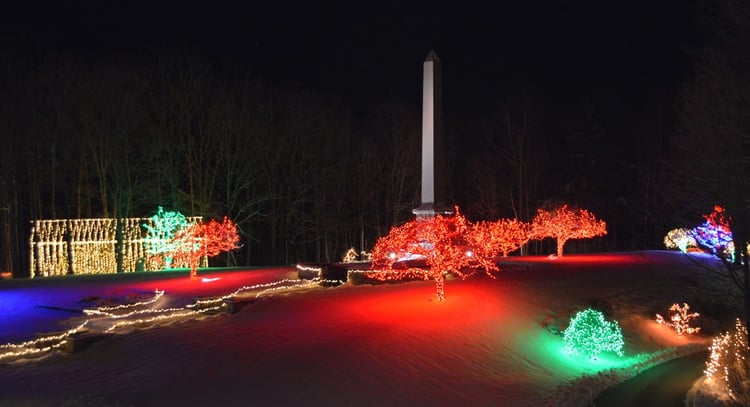 Building a large stone monument in the early 1800s was no simple task. The idea came from a man named Junius F. Wells, aka Brother Wells, who passed through Vermont and visited the birthplace of Joseph Smith, which at the time consisted of crumbling walls and a few foundation stones. He thought there should be something better to mark where Joseph Smith, the founder of the Church of Jesus Christ of Latter-day Saints, was born in 1830. 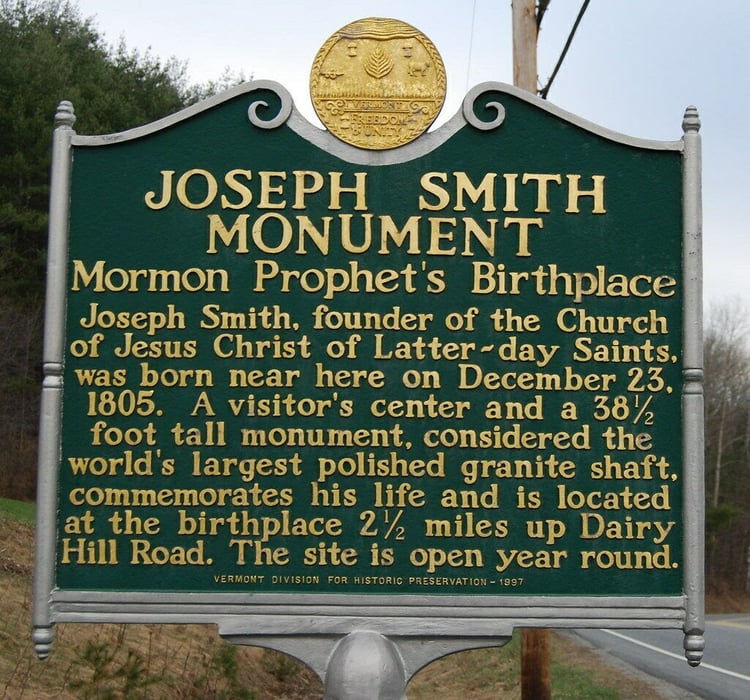 Six years later, he returned to Vermont to create a headstone for his father from Vermont granite. He pitched his vision of a stone monument for Joseph Smith to the contractor Riley C. Bowers from Montpelier, who thought the idea was a good one.

That's all Wells needed to be motivated to make his vision come to life. He proposed his idea to President Joseph F. Smith, the nephew of Joseph Smith and then leader of the Mormon Church. They accepted the idea after Wells was able to verify the site was indeed the place of Smith's birth and the land was purchased.

It was May of 1905 and Wells had about six months to erect the type of monument that typically takes a year to accomplish. 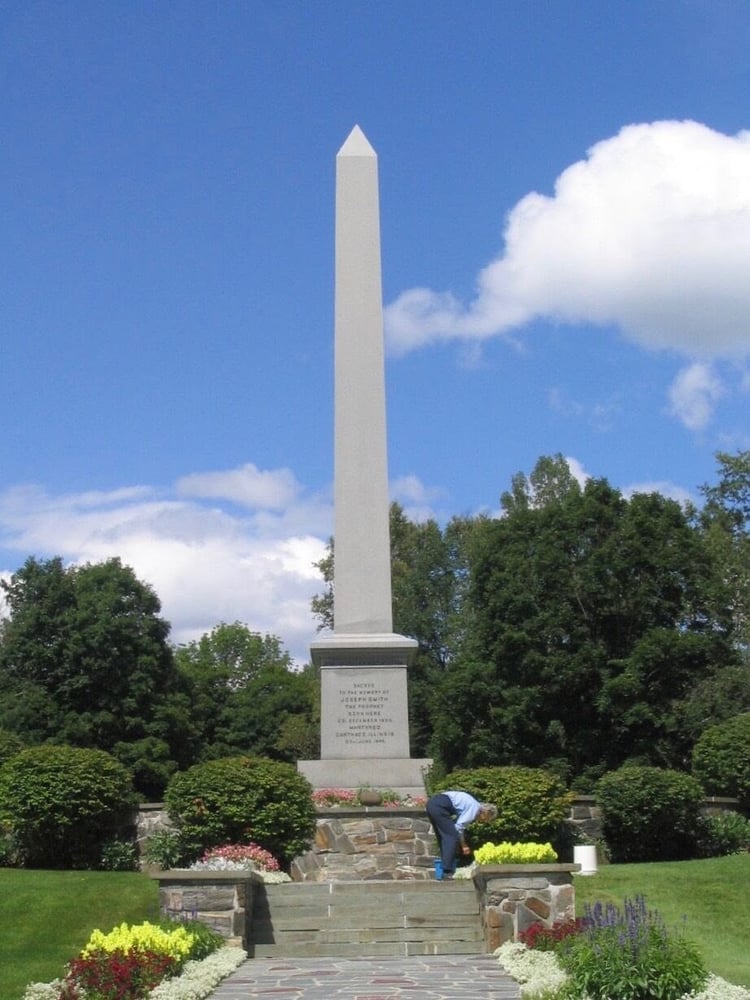 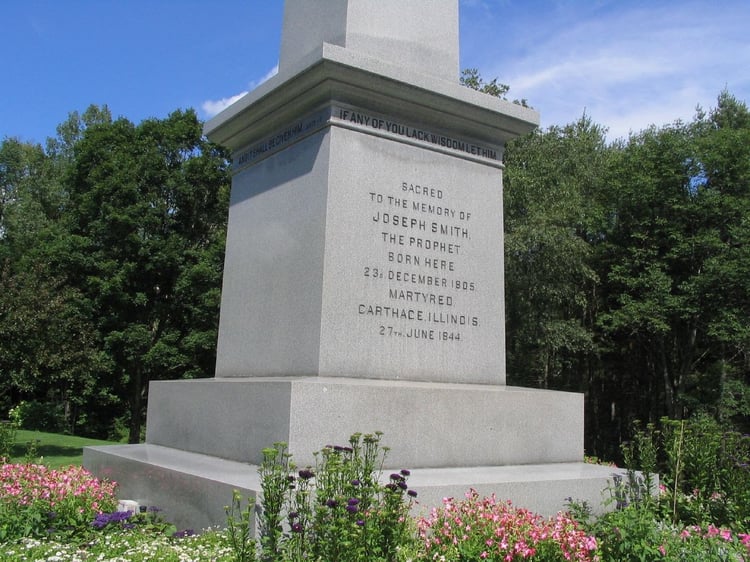 He decided to model the monument after his father's headstone, a 15-foot-tall obelisk. Except he wanted Smith's monument to be a solid 38½ feet tall to represent Smith's age at the time of his death. He also wanted it made of Blue Gray granite and contracted the owner of R.C. Bowers Granite Company of Montpelier to do the work. They found blocks for the monument's two base stones, inscription die, capstone and pillar at the Marr-Gordon Quarry in Barre. But a stone large enough for the obelisk shaft proved elusive.

While they searched the Marr-Gordon Quarry, it was in the process of being purchased by the Boutwell, Milne and Varnum Company, who owned the adjoining quarry (that would later be renamed Rock of Ages.) It was in that quarry they found the 46-long shaft.

It took two days to move the 60-ton stone that would make up the shaft onto a railroad car because the derrick could only lift one end at a time. Once it was cut and polished and now weighed 40 tons, Wells then had to figure out how to get it to the monument site. They had moved the base stones, using a block and tackle system with horses pulling in opposite directions and the largest trees as the hinged points. They decided to employ the same method. Locals said they left a trail of broken trees behind them that looked like a hurricane hit.

All the pieces were falling in place until the journey of the shaft came to Haynes Hill after heavy rains turned a part of Dairy Hill Road known as "Mr. Button's Bog" into a giant mud hole. Wells thought they wouldn't make the deadline of having the monument ready on Smith's birthday and prayed for a miracle. That night, a cold front moved in dropping the temperatures and freezing the ground, allowing the shaft to be pulled over it.

The memorial was completed on time and officially dedicated on Smith's 100th birthday, December 23, 1905. Joseph F. Smith led the dedication service. The site now operates as a tourist attraction.

It Took a Village

According to Scott A. McLaughlin, Ph.D. and Executive Director of the Vermont Granite Museum in Barre, Vermont, the manufacturing and installation of the memorial was not by one Vermont company but instead relied on a cadre of professionals, which included the quarriers of Boutwell, Milne, and Varnum (now Rock of Ages Corporation), the craftsmanship of cutters and polishers at R. C. Bowers Granite Company, the teamsters of the Woodbury Granite Company, and the industry's monument setters. 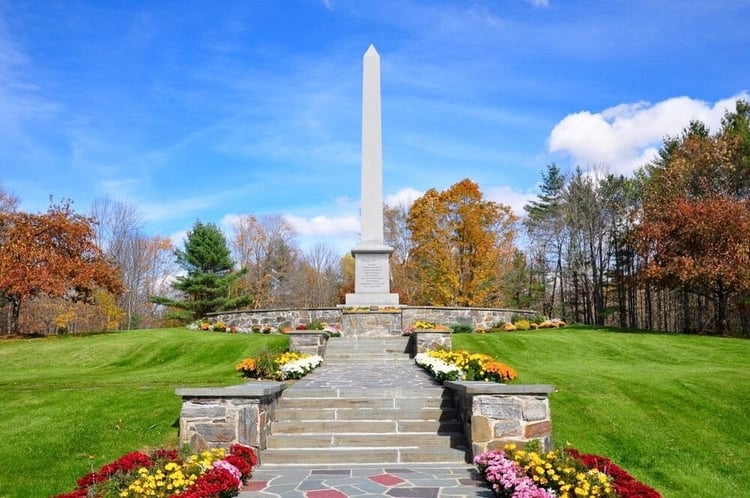 The holidays are a great time to visit the Joseph Smith Monument. It's a popular attraction for locals and visitors. Go by day and take a tour of the grounds, enjoy the scenery and the monument. Then when the sun goes down, the space lights up with a joyful holiday lights display.

And be sure to take advantage of the other places in the area worth a visit, such as:

Download the Barre, VT Getaway Guide for a peek into the region's designation as the "Granite Center of the World," informative listings on the visual and performing arts scene, diverse dining and lodging opportunities, and a coupon offering two adult guided tour tickets for the price of one.