The Stories Behind the Monuments: Lives are Lost and History is Written 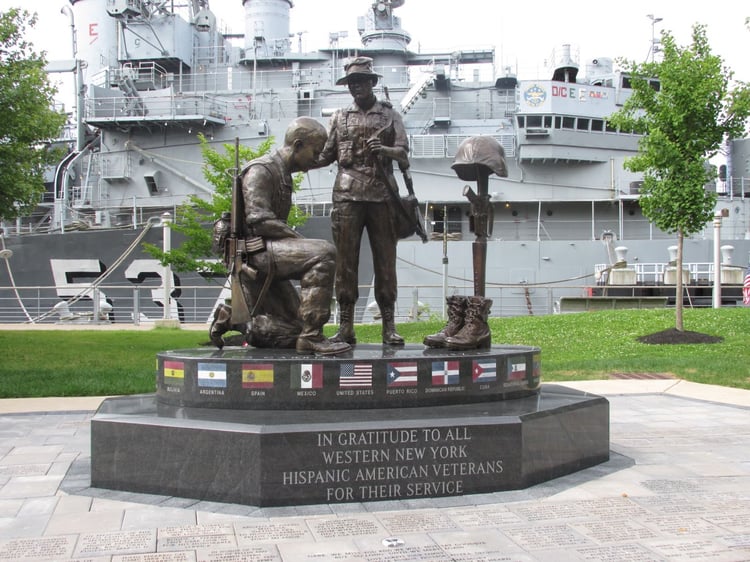 Every civic memorial project begins with a story, a hero’s journey. Lives are changed, sometimes lost and their absence touches families for generations. Tom Koch of Stone Art Memorials will tell you that when someone has the desire to erect a civic memorial, there’s a story behind it. “You don’t know about effort, the story, or the people the memorial represents until you get involved in projects such as these. It’s really intense to think about what these people have done, the journey and oftentimes the sacrifice. I learn a little bit every time I do one.”

Tom’s company is a family business that began in 1857, creating and installing family monuments and civic memorials. A big segment of Stone Art’s civic memorial work is attributed to designing and building memorials to commemorate veterans. Tom says he sees veteran’s parks becoming a staple in every small town as community members want to pay tribute to their local heroes for future generations to see. “I think the Vietnam-era guys are getting to the age where they want to do something. They’re mostly retired now and have the time to get together within their communities and discuss the importance of a landmark for all to experience.”

The veterans’ memorial projects hold a special place in Tom’s heart, given that both his father and grandfather were vets from World Wars I and II. “These guys gave up a lot to go to war for no reason other than to serve their country. Some paid the ultimate price with their lives, many died very young.” 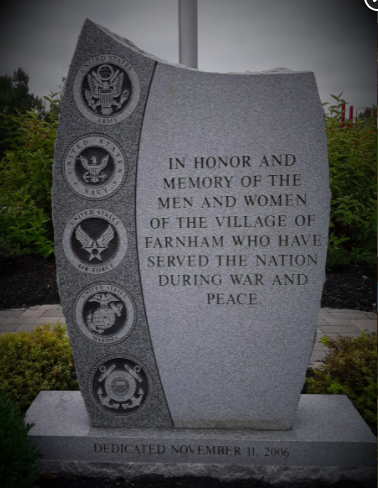 The veterans’ memorials designed by Stone Art are primarily crafted from Rock of Ages BLUE GRAYTM or BLACK MISTTM granite, both quarried in the United States and owned and operated by Rock of Ages. “I’ve been doing this for 45 years and partnering with Rock of Ages was probably the best decision we ever made as a business. They’re totally professional,” he says enthusiastically. “It’s the whole package. If there’s ever an issue, it’s taken care of, no questions asked,” he added, referring to Rock of Ages’ perpetual warranty.

Tom says he sometimes gets requests to use imported stone from India but the memorialists at Stone Art Memorial feel it’s important when producing a memorial for American veterans that the stone comes out of the ground in the United States. “If my dad were here, he wouldn’t want us using an imported stone.”

Sustainability is also a factor. The stone is quarried in an environmentally responsible way, in keeping with Rock of Ages’ and parent company Polycor’s commitment to be carbon neutral by the end of 2025. And as Tom mentioned, they are made to last forever. A Rock of Ages SealmarkTM memorial is guaranteed to last - their unmatched craftsmanship and industry’s strongest warranty provide families with peace of mind, and provides Rock of Ages’ more than 85+ Authorized Dealers across North America with the confidence that the memorials they offer their families will last indefinitely.

The civic memorial projects come to Stone Art due to the large portfolio of projects they’ve been privileged to work on previously, and the strong relationships those projects have nurtured over time.  “We’re the largest memorial company in Western New York. Over the years we have worked with many organizations and committees, and oftentimes groups come to us, after seeing our work in the surrounding areas,” says Tom.

If you’re considering a civic memorial for your community, step one, after forming a committee and finding the land to place your memorial, is to find the right partner to design and fabricate your community landmark. Tom describes their process in a few simple steps. After his initial meeting with the committee to capture any ideas or vision they have for the project, he then starts working with the in-house design team at Rock of Ages to design a memorial concept.  Oftentimes, if photos of the potential land area are available, the design team can render the project on the proposed location to assist with visualization of the civic monument. This design rendering is then shared with the committee and oftentimes the community as well. Feedback is collected and adjustments are made as needed to create the final concept.

They recently worked on the Clarence Veterans Memorial project, which Tom is very proud of. “It’s gorgeous, the entire memorial is Rock of Ages Black Mist granite with a 16-foot fountain.” 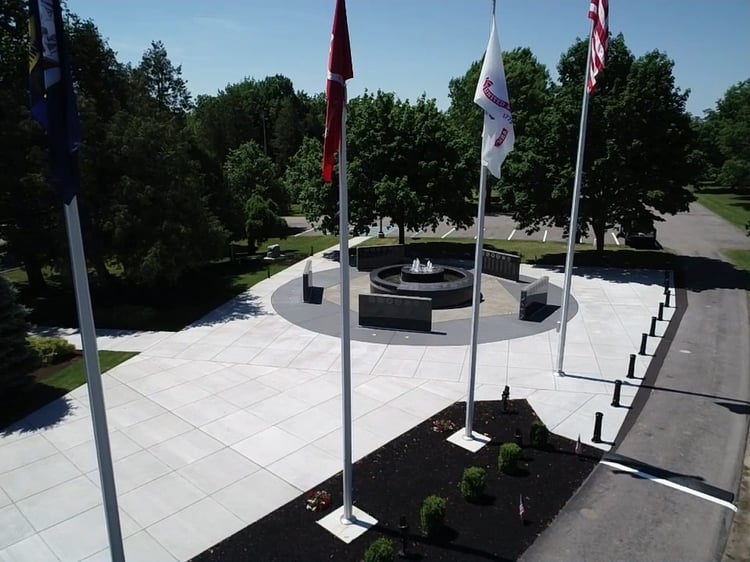 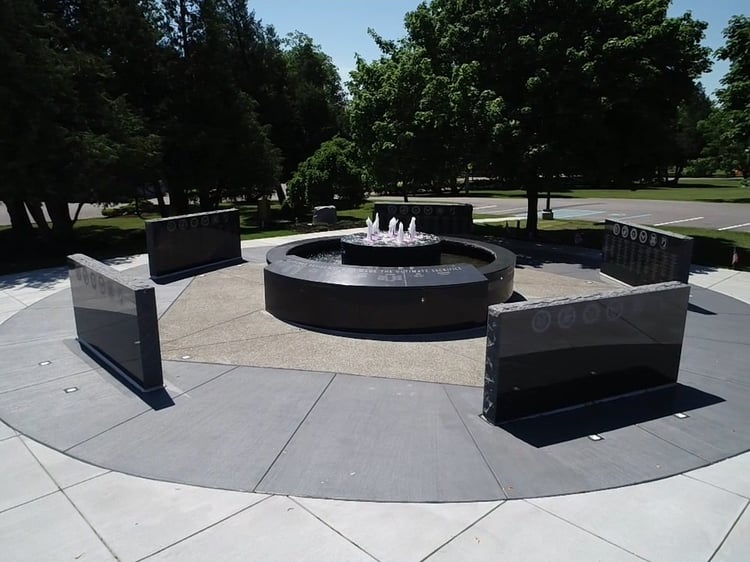 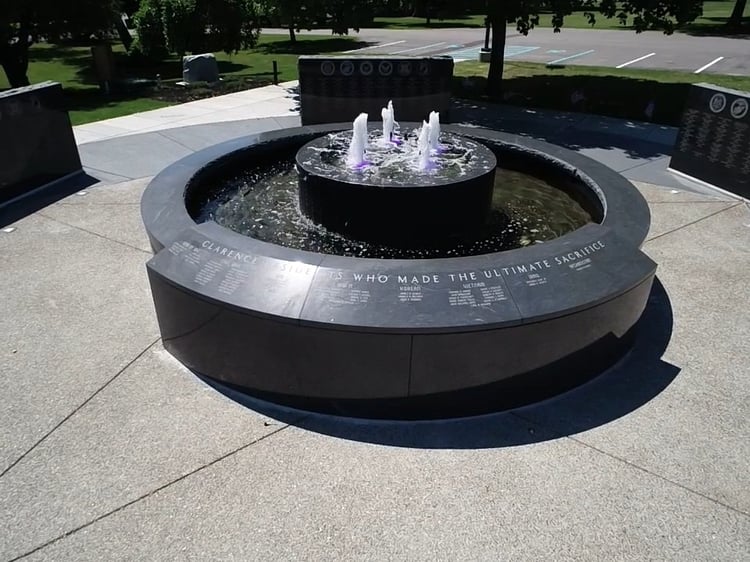 Clarence Veterans Memorial was dedicated this past Memorial Day. Tom added that it saddens him to think about what Memorial Day has become to some. “Memorial Day is supposed to be about our military men and women who went to serve our country and never came back.”  He’s proud of the work his company does to preserve the sanctity of serving in the military, and protecting the legacy of fallen military members and their families.

Other projects Tom is particularly proud of are the civic memorial located in his hometown of Orchard Park, and the prestigious Niagara Falls Memorial. He also had a hand in bringing the iconic Frank Lloyd Wright-designed Blue SkyTM Mausoleum to life.

The project was the idea of wealthy businessman Darwin Martin, who was friends with Wright in the 1920s and commissioned him to design his house and summer lake home for his wife, now known as Graycliff. He wanted a monument to bring his family together at the end of their lives. The unique design was sketched out, featuring Wright’s idea of using the sky as the ceiling, but it was never built.

In 2004, Forest Lawn Cemetery made the Blue SkyTM Mausoleum a reality in conjunction with Anthony Putnamm, an architect trained by Wright himself. They turned to Stone Art to help construct it using Rock of Ages BETHEL WHITE® granite. The mausoleum has proven immensely popular with Frank Lloyd Wright fans who tour the area, which features other Wright-designed projects. 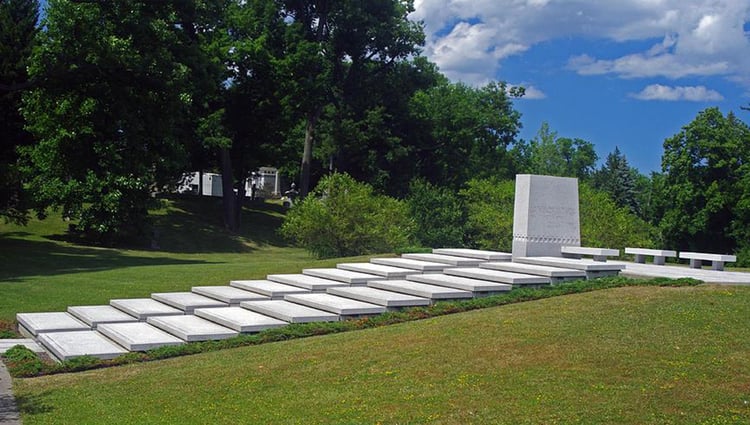 Creating a park-like setting is a trend that Tom says he sees becoming more popular. “Cemeteries are incorporating more natural landscaping into the designs of their cemetery sections, as well as families incorporating nature and the elements into their memorial designs.” He’s also getting requests to incorporate technology into memorial designs by attaching a QR code to the stone.  Family members and visitors can then scan the code with their phones, which will direct them to a web page with details about the person being memorialized; including but not limited to, written stories and biographies, videos and photos.

Whether it’s a civic memorial or a family monument, Tom says every project they do is important. “By the time a monument comes about, it’s touching a lot of people.”