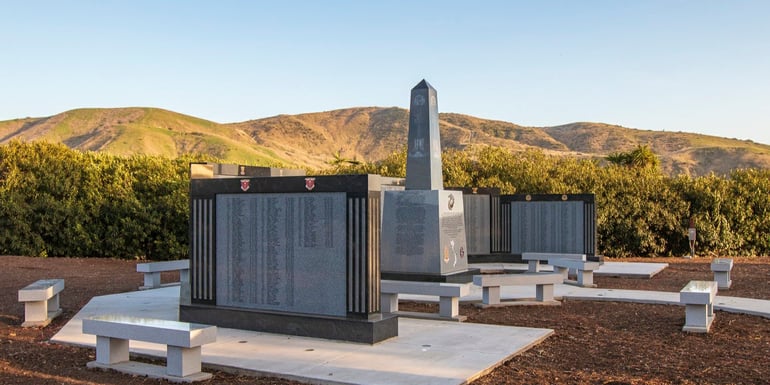 To honor the Marines and Sailors of the “Fighting 5th” who lost their lives during the Vietnam War, designers of a memorial at Camp Pendleton in California combined two iconic American stones to create a legacy worthy of their sacrifice.

Framed by the majestic Santa Margarita Mountains, the 5th Marines Vietnam Memorial displays the names of the 2,706 fallen Marines and Sailors on two granite walls that surround a dramatic 14-foot tall black spire rising from the center. The 50-ton monument traveled nearly 3,000 miles from the Rock of Ages craftsmen center in Graniteville, VT where it was assembled at its final destination in Southern California. The monument was dedicated on Memorial Day 2018 during a ceremony at the San Mateo Memorial Garden at Camp Pendleton. 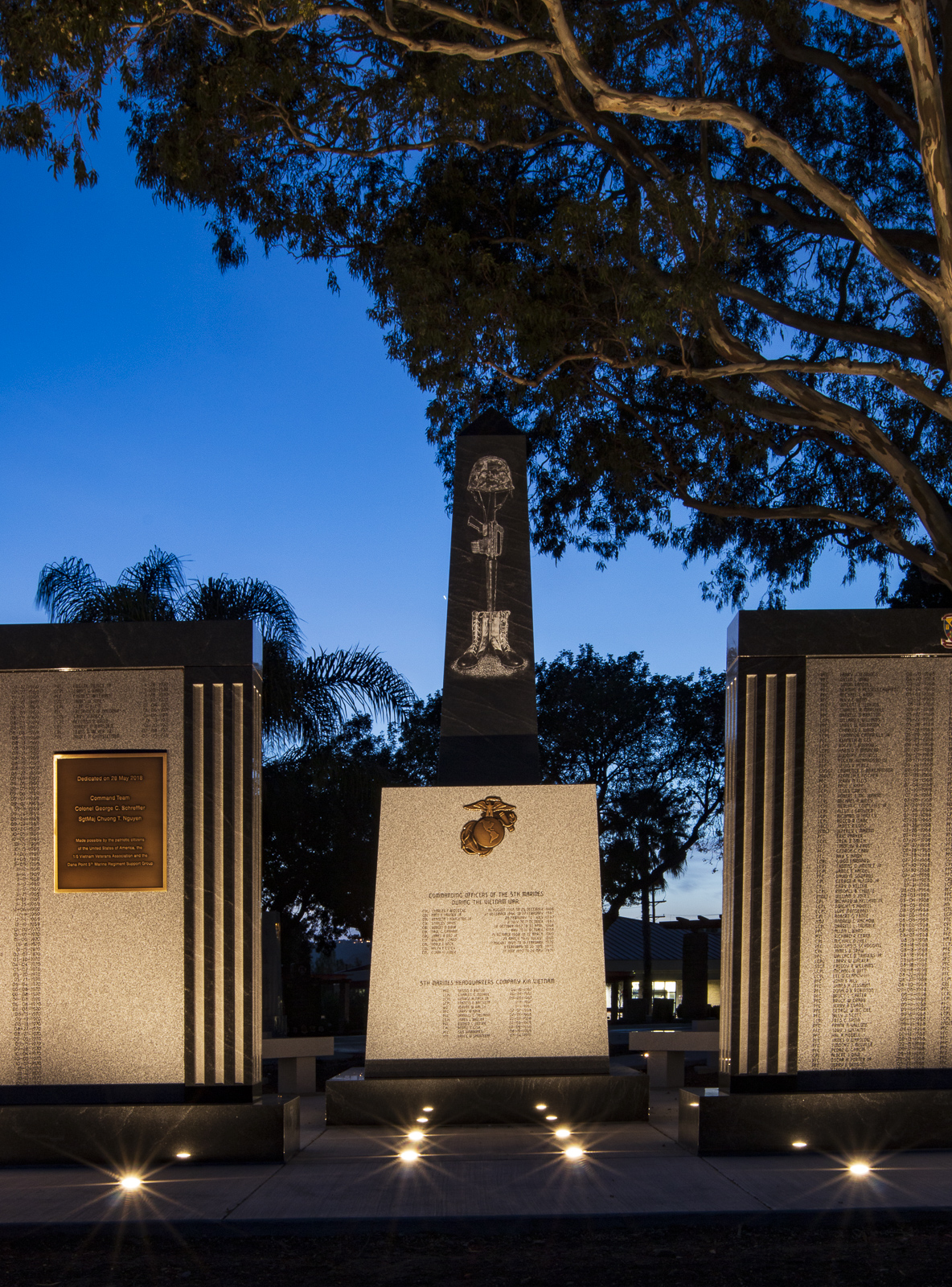 Rising up from the memorial is a black spire etched with the iconic battlefield cross.

The memorial encompasses 1,390 square feet and features six two sided name stones. These name stones are fabricated out of Rock of Ages BLUE GRAY™ granite quarried in Barre, VT. Each name stone is framed by Rock of Ages BLACK MIST ™ granite quarried in Elverson, PA. The name walls angle out embracing a Black Mist obelisk whose four sides are detailed with the etched battlefield cross, honoring the 2,706 soldiers lost in Vietnam.

The committee behind the memorial needed only to give the Rock of Ages team a general overview of what they were looking for Rock of Ages to design and fabricate it, says Tom Burrington, Vice President of Mausoleums and Feature Memorials. "We were given the number of names and how they were to be represented. The committee explained their wishes for commemorative emblems and symbols to be included and provided us with the lot details and dimensions. We took it from there." 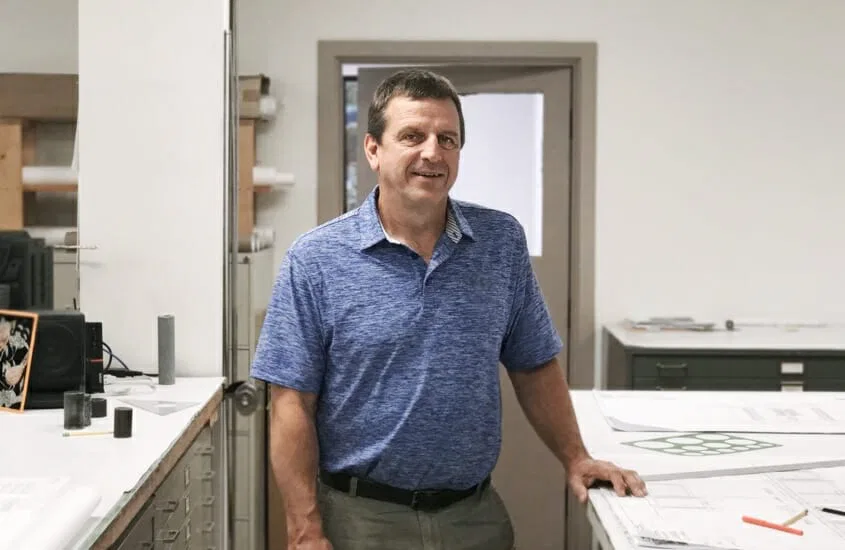 David Fournier lead the Rock of Ages design team. An eternal optimist, David sees no sadness in his job, but rather gratification in designing a place where others can go to honor those who are no longer with us.

According to Dave Fournier, Lead Architectural Designer at Rock of Ages who worked on the Vietnam memorial, the Blue Gray granite was chosen for the name panels because it’s excellent for carving and achieving contrast.

“It’s also an iconic American stone that’s even used for war memorials overseas to honor our fallen soldiers,” he added. “It brings a distinctly American feel to a monument.” 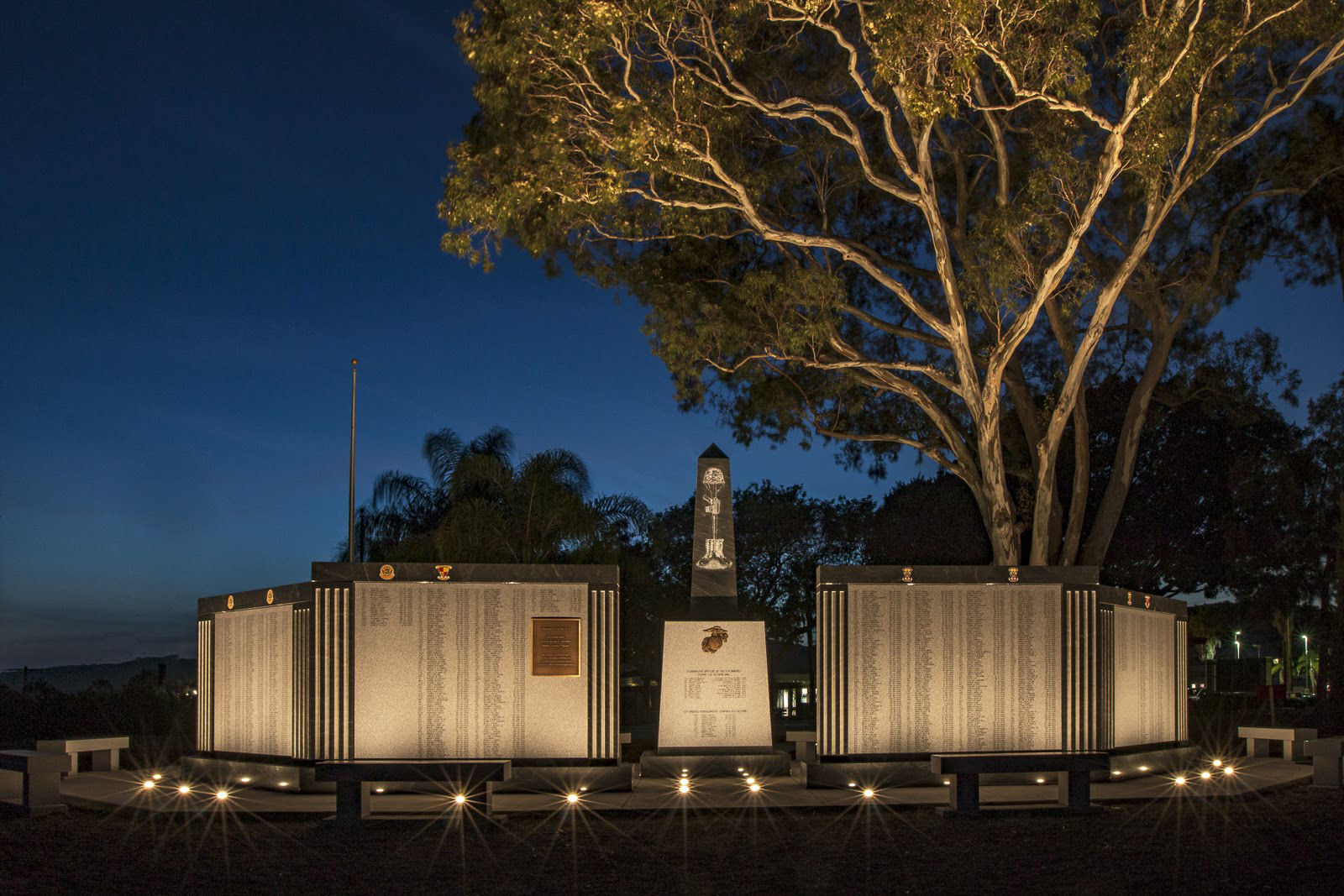 A dramatic start to an historic journey

The monument received a patriotic sendoff from Rock of Ages in March 2018 for its cross-country journey. When the three flatbed trucks — carrying the memorial in sections — pulled away from the Graniteville craftsmen center, employees and local veterans holding American flags lined the road. 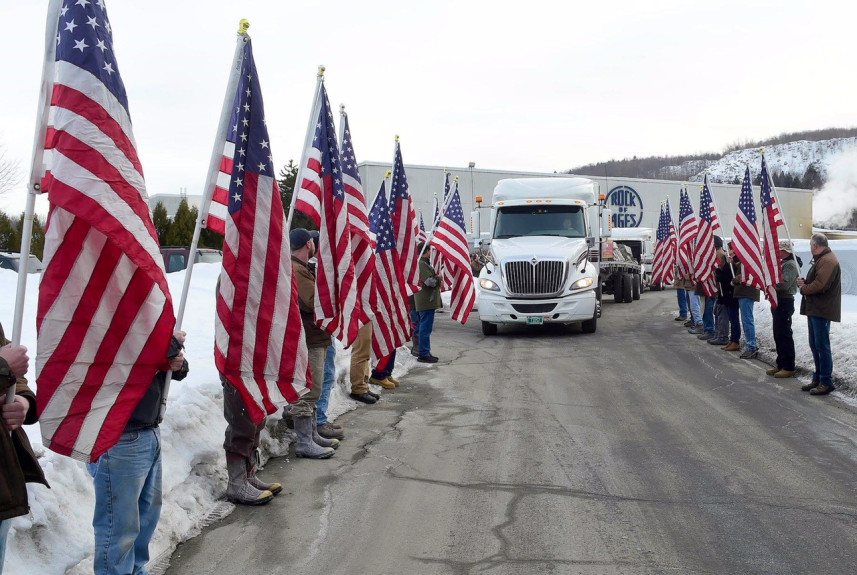 The memorial for the 5th Marines left the Rock of Ages Vermont craftsmen center on March 22, 2018 for a long cross country journey.

Each of the trucks was driven by a veteran and the convoy was accompanied by dozens of volunteer Patriot Guard riders as it traveled through 12 states to reach Camp Pendleton. 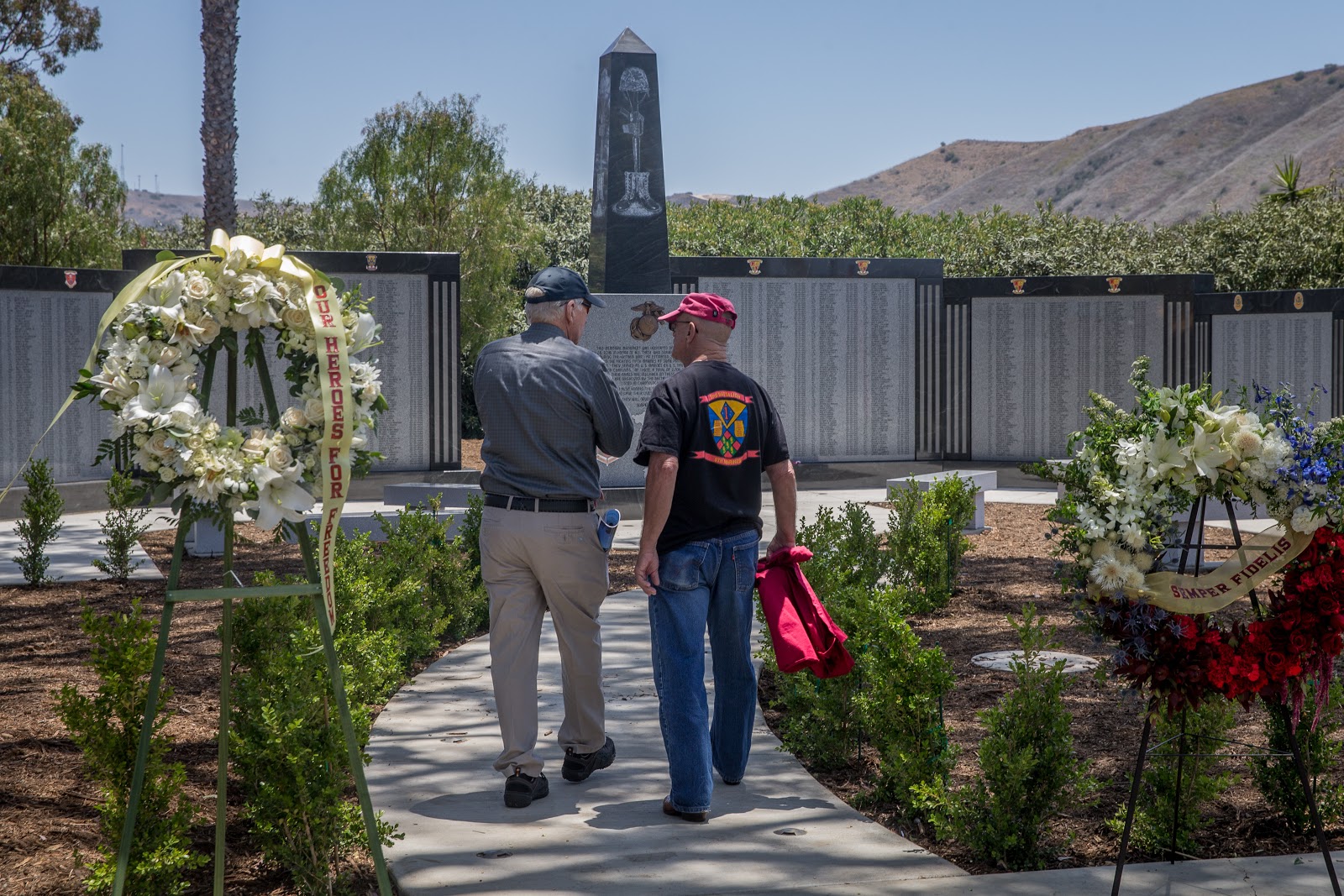 The memorial is inscribed with the names of the 2,706 Marines and Sailors who gave their lives serving during Vietnam.

The 5th Marines, the most highly decorated regiment in the Marine Corps, deployed to Vietnam on March 5, 1966 and remained there for five years. While the names of those killed in action were included in the Vietnam Memorial in Washington, DC, the Camp Pendleton memorial was the first to exclusively honor this regiment. 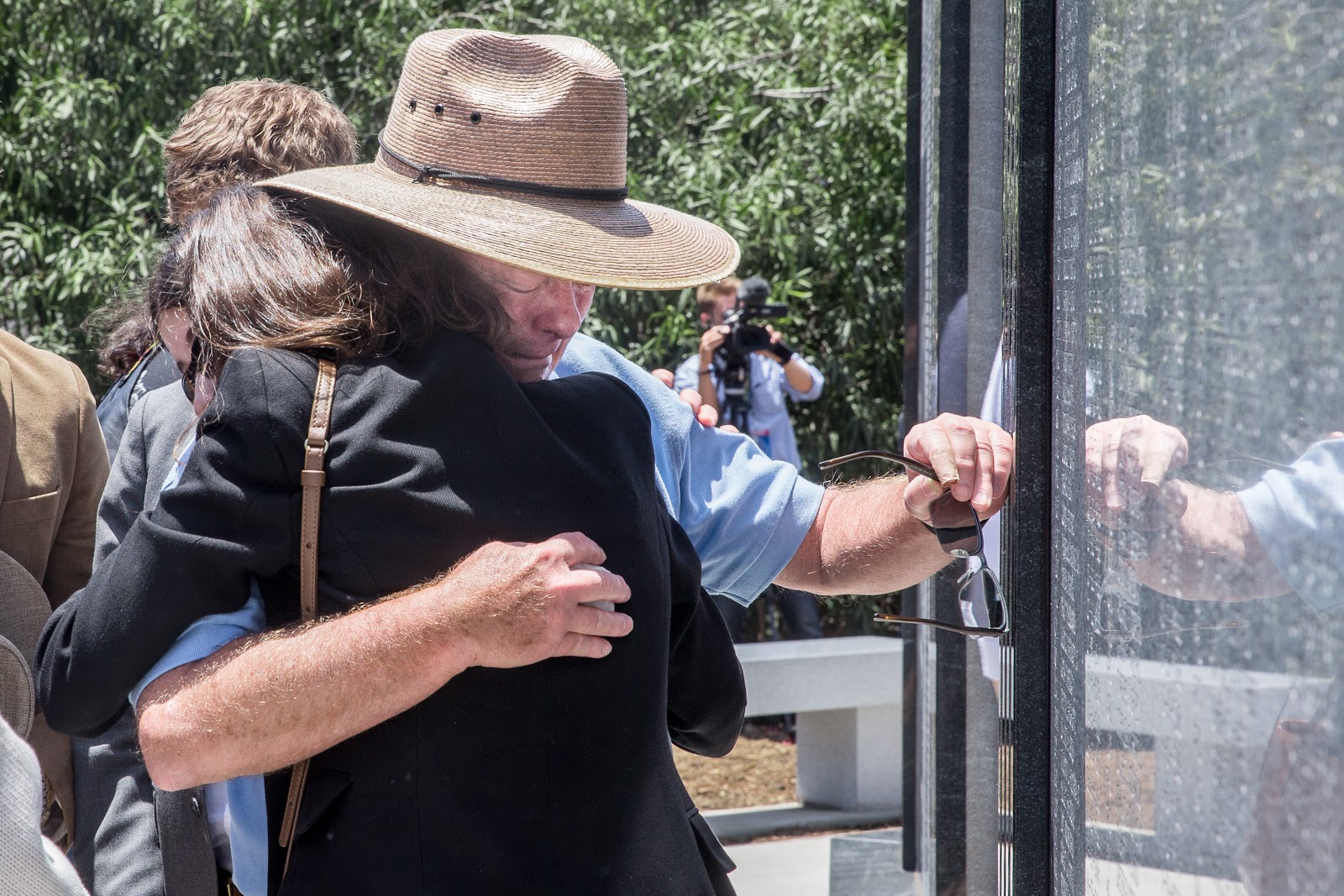 Fournier said that when he saw photos of the memorial, installed and lit against its mountain backdrop, that it was more powerful than he’d imagined when he was working on the architectural plans. “But when you think about what a steep price those in that regiment paid, you realize why organizers wanted to create such a special memorial in their honor.”